Soroti District Local Government has received a brand-new Motorcycle from the Ministry of Agriculture, Animal Industry and Fisheries, MAAIF. The brand-new Motorcycle registration number UFF-952M was this afternoon handed over to the district by the minister of State for Fisheries, Hon. Hellen Adoa at Soroti Flying School. Other equipment like Surveillance kits (Phone/Tab plus Solar Changer), an assortment of standard personal protective equipment (PPE) including; helmets, overalls, and safety goggles, forms part of FAO’s contribution to scaling up efforts to respond to the Desert Locusts.

Soroti district is one of the districts in Uganda impacted by the five waves of Desert Locust invasions from 9th February, 2020. The Locust invaded through the district of Amudat and Moroto from Kenya. Soroti as the district the sub counties of Gweri, Asuret and Tubur were affected by the desert locusts invasion on food security and the social- economic indicators. While receiving the Motorcycle and other equipment, the Ag. Deputy CAO Soroti district, Jane Akiror commended the MAAIF and partners for their timely intervention, noting that not only the affected districts require high levels of surveillance and control measures to counter any invasion of desert locusts, however the equipment will also help in enhancing other Agricultural Activities (Extension workers). Samuel Enagu, the Vice Chairperson LC-5 Soroti thanked MAAIF for the response saying the district will put the good use of the motorcycle, “when you are digging using a hoe, and if the snake come a round, you can be able to killed the snake using the same hoe, so we shall make the best use of the motorcycle,” he noted.

Meanwhile, the state minister Adoa in her speech said to enhance preparedness and avert any negative effects of the deserts Locust invasions, Uganda has already prepared a Desert Locust Control Strategy and Action Plan for 2020/2023 which includes Sensitization and awareness creation, Capacity building for all stakeholders, Surveillance, monitoring and mapping of the Desert Locust spread, Ground control operation by UPDF and UWA, and Aerial control operation among others.

Minister Adoa said the intervention of Motorcycles is targeting 26 districts of Karamoja, Teso, Lango, Acholi and Elgon sub-regions that were hit by the first Desert Locusts invasion in 2020. She said the Eastern Africa and Horn of Africa Regions are still under Desert Locust threat and invasion. “The Food and Agriculture Organization (FAO) of the UN report of 06/01/2022 indicates that there are small swarms of immature adults in Soroti and control is still on going. 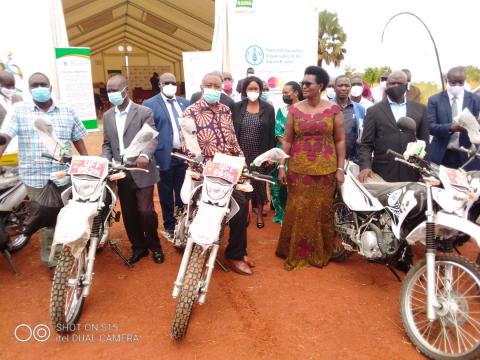 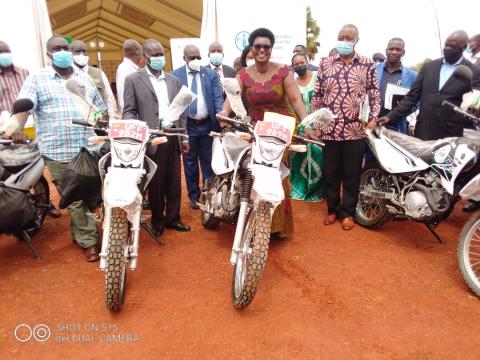