The community of Cheele-Tubur Primary school in Tubur sub county in Soroti district are excited after the district comes to their rescue by constructing a 5-stance drainable pit latrine.

For long the state of the school pit latrine was appalling since the only one pit latrine that used to serve pupils of more than seven hundred was filled up forcing the learners to defecate on their nearby bushes thus posing environmental health concern.

This forced the parent community to start collecting money at least two thousand shillings per child to enable the construction of pit latrine by parents themselves, a decision which was agreed during the recent AGM.

However, the district through its yearly school phase lifting program approved a contract for a 5 stand drainable pit latrine.

Today the district held a groundbreaking for the construction work to kickoff and the project was handed to Sure Friends Civil and Agro input Ltd, the constructing company.

He adds that the maintenance of Low-cost sealing of Gweri-Awoja in Gweri sub county and Lira-Kamuda-Aboket road in Kamuda sub county at the cost of 49,158,800 was also launched 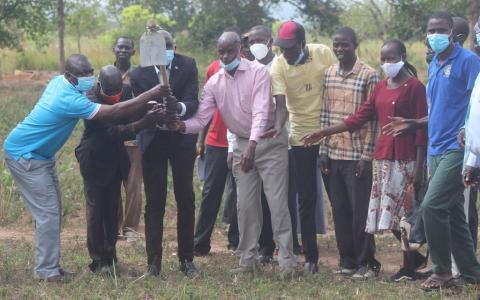